Yay! Accute Appendicitis! (And Other Stuff)

Everybody here that works with me on my scores budgets our writing and recording schedules very strictly, making sure that every day is precisely planned out.  We don’t have any other choice.  With scoring going full-steam on both Battlestar Galactica and Terminator: The Sarah Connor Chronicles, there’s not a lot of time to mess around.

I don’t usually factor in time to have an organ removed.  But I might have to start.

I’m scoring the Terminator season finale on Monday when I get a stomach ache.  18 hours later, I’m in the ER having my appendix out before it explodes (I guess this means I’m not a Cylon).  Now, I’m back at it, writing some last minute cues while hopped up on generic Vicodin.  If the finale music gets a loopy, at least you’ll know why. 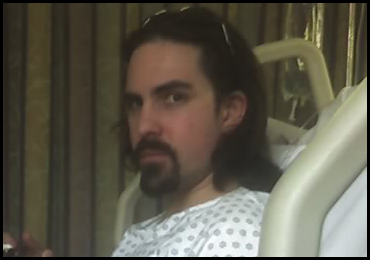 My brother snapped this pic the morning after my surgery.  Don’t I look happy to get a break from writing music?!

Now, before I get barraged with “get well better”s… I am feeling much better now.  🙂  But, I wanted to take this opportunity to shine a light on my incredibly dedicated music team.  These guys work behind the scenes to bring my music to the screen, but I can’t stress enough that nothing would get done without them.  When I got sick, everybody picked up the slack and kept this crazy machine going so all our deadlines would get made.  This allowed me the freedom to sit in a hospital bed for 2 days and eat Jello and complain.  🙂  So, an extra special thanks must go to:

But, not all news this week was bad.  Visions in Sound recently announced their picks for the TOP 25 Soundtracks of 2007 and I made the list!  Not only was I the only person to make the list twice, but I made it three times.  In fact, every CD I released last year cracked the top 15… and, for the second year in a row, my most recent Battlestar Galactica album came in at #1.  Check out the complete list:

While I’m thrilled that BG3 took the top spot, I’m especially excited that little scores like Rest Stop and Wrong Turn 2 could get some love too.  These smaller scores can be easily overshadowed by the big dogs, and it’s good to know that people out there are still listening.  So, thanks to VIS host Rob Daniels for his good taste!

That’s basically all the news fit to print. I’m still pressing ahead on Battlestar, I guess we’re premiering now in April or March.  I honestly have no idea.  I’ll also have updates on the upcoming Battlestar Galactica score concert(s) this spring and summer, so keep an eye out in the next few weeks.  There could be some very exciting news on that front very soon.  Also, Terminator: The Sarah Connor Chronicles premieres this weekend on Fox.  I’ll write an entry about it sometime this weekend, so check back before the Sunday premiere.

A very healthy “So Say We All”!