Time to Rename this Blog 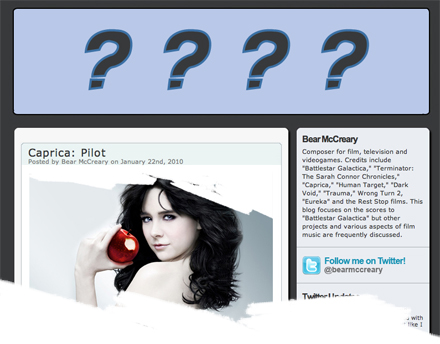 The time has finally come:  time to change the name of “Bear’s Battlestar Galactica Blog.”

I’m still planning on writing about all things pertaining to BSG, including more albums, concerts and other goodies on the way.  However, I am enjoying writing about Human Target, Caprica and Dark Void.  With Trauma and Eureka set to return, and other feature film and video game projects already in the works, there’s too much going on to limit this blog title to BSG.  The range of topics has expanded as much as the readership and its time the title of my blog reflect that.

But, what do I call it?  “Bear’s Music Blog?”  Pretty stale.  “Bear McCreary: An Accordionist in the Wilderness?”  It certainly catches the eye.  “Inside the Secrets of the Behind the Making of the Music of Bear McCreary: Revealed?”  Seriously, I’m open to suggestions here, because I’m pretty much stumped at the moment.  Can you guys come up with any other suggestions?