In honor of tonight’s 2-hour season finale of Terminator: The Sarah Connor Chronicles, I present a quick look at the major thematic elements that comprise the score. 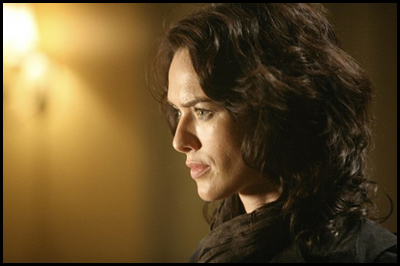 This is the most frequently used theme in the series, and not coincidentally, also the longest and most developed.  Most of my themes (both in T:SCC and BG) tend to be short motivic ideas.  I rarely have opportunity to introduce a theme that has an A section and a B section.  However, as I was scoring the pilot, I came up with this tune for Sarah:

The first four bars (let’s call that the “A section”) live in E minor, and resonate with the darker aspects of the show.  But, the latter half (the “B section”) oscillates between C and A major, which is a much more interesting and uplifting progression.  The melody for the B section is really quite beautiful and damn catchy (if I do say so myself).  My guess is, if you’ve ever had something from T:SCC stuck in your head, this is it.  Also, Sarah’s theme is hammered into your brains in every episode, as variations of it underscore virtually every scene involving Sarah, including all her voice-over narration.

I don’t consistently correspond the obvious theme with a scene, however.  Sometimes the uplifting B section is featured in a vicious action scene, reminding us that these are still real people, a real family at stake.  And, the melancholy A section will frequently underscore a happy moment between Sarah and John, lending a sense of darkness to the scene. 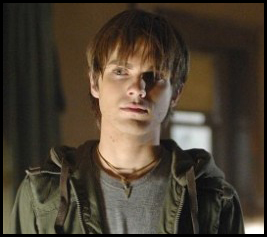 Also originating from my work on the pilot, this theme has undergone many interesting shifts.  It was originally composed for the scene where John walks home from high school, after he first meets Cameron.  It was meant to only convey his loneliness and awkwardness in a new town.  A solo clarinet stated his theme:

Unlike Sarah’s theme, John’s theme is much more maleable and adaptable.  It can be set in major or minor mode, or any variation in between.  This is useful, because John’s character undergoes major transformations in the first season.  The theme that began underscoring a lonely high school kid, also had to play underneath him defying his mother and charging into danger in “Heavy Metal.”  It also had to underscore his confusion and vulnerability when he finds Charley in “Gnothi Seauton.”  The musical ambiguity in the melody makes it a very flexible thematic idea, an essential trait for a theme for such an evolving character. 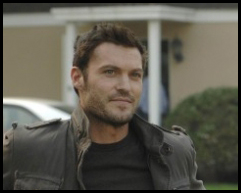 Derek actually has two themes.  The first of which, heard in “Queen’s Gambit” and at the end of “Dungeons & Dragons,” is an aggressive rhythmic figure in the strings that continually shifts between 4/4, 3/8, 2/4 and back to 3/8.  In fact, one of the cues in “Dungeons & Dragons” changed meter over 100 times and was less than 90 seconds long!

That rhythmic theme underscores Derek’s anger, determination and profound loyalty to his family (whom he believes to be limited to Kyle Reese in the early episodes).  However, I also had opportunity to create an emotional theme for his more understated moments:

This theme is first heard in “Dungeons & Dragons” when he awakens in the terminator prison camp.  It is woven throughout this pivotal episode and returns again in “The Demon Hand” and “What He Beheld.”  This theme is inherently melancholy, and wistful.  Think of the scene in “Demon Hand” when he stands outside with his feet in the grass.  The music needed to help remind us that even though he is a hardened prisoner-of-war, he longs for his life the way it used to be.  But, the tritone shift at the end of the theme (D major to G# minor) adds a dark and unsettling twist.  So, his theme can also play those moments where we are unsure of his motives. 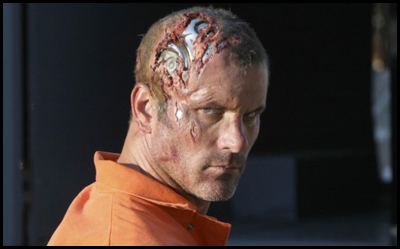 Anytime there is an evil terminator on screen, whether it’s Vick, Cromartie, or endo-skeletons on the march in the future, you are hearing this rhythmic idea pounding away in the metallic percussion:

I also add to this motive, a dark, descending synth string sound that sounds almost like a robotic dying breath.  It’s hard to explain, but I’ll bet you know the sound I’m talking about if you’ve seen the show.  I think the first stand-out moment where this theme was featured was in “The Turk,” when gas-masked Cromartie storms into the hospital to steal blood.  However, like Sarah’s theme, this idea originated in my score for the pilot, and is featured in every single episode, often providing the rhythmic basis for entire action sequences. 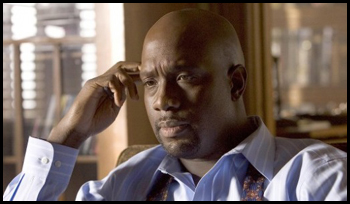 From the beginning, I knew it was important to introduce a theme for agent Ellison.  In these nine episodes, he has come full circle from skeptic to believer.  This long arc provided a great opportunity for musical development.  So, I began with a melodic idea that is very simple, indeed, the shortest and most basic of any T:SCC character’s themes:

Because of its inherent simplicity, Ellison’s theme has the greatest potential to expand and evolve. Early in the season, we only heard simple statements of it, usually in double and single reeds such as soprano saxophone, oboe and English horn.  There was very little variation.  However, as Ellison followed the trail and began to put the pieces together, the variations became more complex.

Ellison’s musical evolution peaked in “What He Beheld,” during the same scene as his first season story arc did: the aftermath of the FBI’s battle with George Laslo (a.k.a. Cromartie).  As Ellison faces him down by the pool, we hear a solo English horn state his unaltered theme.  Then, like echoes caught in a feedback loop, the strings pick up the first four notes of the theme and begin to repeat them hypnotically.  A violin and flute then dance impressionistic variations of his theme over the ostinato as Laslo leaves, mysteriously allowing Ellison to live.  The piece is oddly Ravel-inspired, and stands out harmonically from anything else I’ve ever written for this show.

There are a handful of other themes, including one for Andy Goode (introduced with the “Queen’s Gambit” chess matches and returning ironically for his future confession in “Dungeons & Dragons”) as well as a haunting melody I wrote for the shell-shocked Dr. Silberman in “The Demon Hand.”  However, the musical ideas featured here comprise the primary themes of Terminator: The Sarah Connor Chronicles.  Almost every cue is developed out of one of these themes.

Scoring the first season was an incredibly rewarding experience, and I hope that I can continue to play in this musical playground.