The “Walking Dead” blogs thus far have focused on my creative process and the instrumentation.  But, bringing a score from imagination to reality requires the time and energy of many other people on the music team.  They are integral to the creation of the score, and work tireless hours to ensure my ideas are translated to the final recording (and frequently improve on those ideas as well).  With this week’s video, let’s shine a long overdue spotlight on the music production team:

WILD SPOILERS AHEAD: Last week’s episode, Vatos, was dominated by intense action.  Wildfire simmers with equal conflict and urgency, but in a muted tone.  The story is more rooted in character, and as a result, the score focuses on orchestral elements more than other episodes.

The opening act, where Andrea must say goodbye to her sister Amy, uses orchestral colors almost exclusively.  Rick, Shane and the rest of the group watch nervously as Amy awakens from death in Andrea’s arms. The scene radiates a surprising gentleness.

In other zombie films, we’ve seen the transformation as a violent one.  Here, Darabont allowed the process to be pastoral, almost serene.  Frank was clear about his musical vision for the scene; he did not want any hint of terror or suspense.  He and I decided to have the score focus entirely on Andrea’s emotional state.  The cue begins by introducing the four-note thematic seed that will develop throughout the whole cue:

The motive is performed by a clarinet and a solo French horn, marking the first time a brass instrument has been included in the score.  The horn soloist is Laura Brenes, whose heroic sound soared throughout the “Human Target” soundtrack.

Zombie Amy sputters to life and reaches for her sister, while Rick and Shane ready their guns.  The scene is very tense.  However, layering it with suspenseful, horror clusters would have ironically lessened the tension.

The emotional connection here is between the sisters.  Andrea is less concerned with her own survival and more concerned about being able to communicate her final words to Amy she never got to say.  With the score, I wanted to make their storyline the primary focus, and ignore the zombie elements in the scene.  The tension is already there, in the actors’ performances and the subtext.  So, no evil banjo in this scene.

However, Wildfire was not without its share of spooky cues.  Jim is revealed to have been bitten in last episode’s attack and descends into a fever.  I tend to use the electric banjos, autoharps and dulcimers to signify the presence of zombies, so I chose to underscore his fever dreams with the same instrumentation:

My goal was to imply that Jim is transforming from himself into a zombie.  Did you guys pick up on this?  Whether or not you noticed the “zombie banjo” reference, the cues still created an appropriately nightmarish texture. 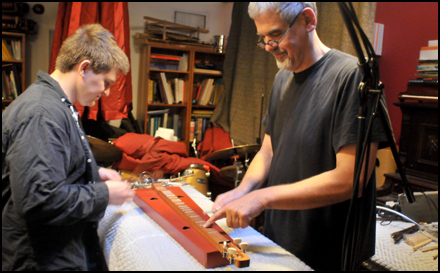 The most terrifying cue in the episode, in my opinion, is when our heroes approach the Center for Disease Control.  The outside of the building is a desolate war zone, with zombie carcasses strewn about.  Here, I thinned the texture out as much as I possibly could, and featured the cardboard dulcimers in ambient textures:

The dulcimers are generally a background element behind the more prominent electric banjo and percussive autoharps.  This cue is the first time I’ve featured the dulcimers as a solo instrument.  The result is a creepy sound that also suggests we’re arriving at a place both geographically and narratively we’ve never been yet.  The ambient dulcimers blended seamlessly into the buzzing flies in the sound design to create a unique soundscape.

In Wildfire‘s gripping finale, our heroes stand outside the CDC, not knowing if there’s anyone within to hear their pleas, as zombies approach from all sides.  Here, the string orchestra and orchestral woodwinds state a funereal chorale, while the acoustic guitars arpeggiate underneath:

Like Amy’s resurrection scene, I wanted to focus on the character conflict and drama rather than the superficial suspense of impending zombie mayhem.  The result helps make the scene a dramatic one as well as a suspenseful one.

At last, the doors open wide, setting up the story for next week’s episode: the conclusion of the first season of “The Walking Dead.”  Keep an eye out here in the next week or two.  I will blog about the final episode of season one, as well as several fun holiday-related projects.