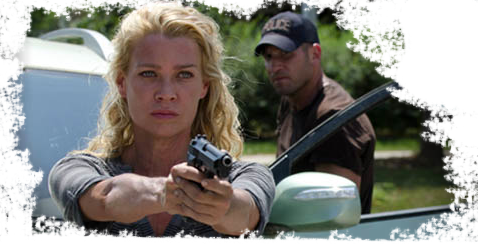 Tonight’s episode of “The Walking Dead,” Secrets, allowed me to further explore the exotic folksy instrumentation of the score.  One of the instruments I featured was the hurdy gurdy, as detailed in this week’s in-depth video blog:

The hurdy gurdy was not the only unusual instrument I used for this score.  I also wrote for Paul Cartwright on the electric fiddle.  Paul’s a fantastic instrumentalist I have worked with on virtually every project I’ve ever scored.  He was featured prominently throughout “Battlestar Galactica,” “Terminator: The Sarah Connor Chronicles,” “Dark Void,” “SOCOM 4,” and “Caprica” just to name a few. 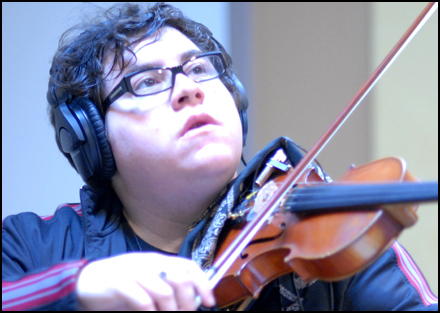 Paul is able coax an absolutely other-wordly sound from his instrument, combined with his collection of effects pedals and amps.  But, in addition to unique sounds, he also has a strong feel for country and bluegrass music.  This combination makes him perfect for “The Walking Dead,” and I had already used him in Season 1, for the episode Vatos.

SPOILERS AND SECRETS AHEAD: For Secrets, I wrote solos for Paul that underline the episode’s escalating tension.  The first place you will hear the electric fiddle is when Patricia is preparing the chickens to feed to the captive zombies. (One of the most gruesome scenes yet, especially once the bone-crunching sound effects were added!  But don’t worry, no chickens were harmed in the filming.)  As she heads toward the barn, Paul’s lonely electric violin whispers behind her, adding an ominous sense to the visuals, especially the barn.

However, I moved Paul’s solo to the forefront for the scene between Herschel and Dale.  This scene is important because it crystalizes the philosophical difference between the two camps.  Here, I asked Paul to turn up the distortion and really dig into the strings.  The result is a sound that is truly menacing:

The score is not necessarily commenting on who is right or wrong.  That’s for the audience to decide (and you could see it either way).  Instead, the music simply suggests that this core disagreement over the nature of the zombie affliction may perhaps lead to more dire conflicts in the future.

However, it wasn’t all ominous violin textures this week.  I had a couple great action cues as well.  A memorable attack at the pharmacy gave me a chance to let loose, but it was during the scene with Andrea and Shane that I really got to go wild.  They are completely surrounded by walkers and Andrea panics and can’t handle her weapon.  Rather than eliminate the threat, Shane just watches, trusting that she’ll learn from this experience and get the job done.  (Tough instructor!)

I started this sequence with a small layer of stringed percussion (autoharps, dulcimer, psaltery, etc) combined with a dissonant, chugging pattern from the hurdy gurdys.  Just these instruments alone gave the score a frantic, terrifying sound:

But, as the fight heats up I added the orchestral strings, drum set, electric bass, guitars and banjos to form a chaotic, pounding texture.

This cue is one of my favorites in Season 2, because its construction is so simple.  If this were performed by a taiko ensemble, it sound exactly like a cue from “Battlestar Galactica.”  But, the unique instrumentation and the personalities that each player bring to their instruments make this piece distinctly fit “The Walking Dead.”

The last cue in the episode is when Dale confronts Shane and tries to get him to leave.  Shane gets that wild look in his eyes again, and I brought back the rhodes and electric bass pattern I first introduced in Save the Last One.  This musical echo was meant to remind us that Shane is a killer.  This is the darker of the two Shane Themes appearing again.

I have fond memories of this episode because of a hilariously failed experiment.  My percussionist, Jonathan Ortega, and I wanted to try some altered percussion sounds.  So, Jonathan donated his old drum set from middle school to the cause and we completely trashed it.  We spent hours hammering, cutting, drilling and bolting pieces of metal to the heads, the body, the sticks… crafting a “Frankenstein” drum set, hoping to create a sound that would be like a drum set but trashier and more zombi-fied.

Our hours of labor didn’t pay off at all.  No matter what we did to the drums, the effect was essentially inaudible when it was put in the final mix.  So, we basically ruined Jonathan’s drum kit for nothing.  Oh well.  Drummer Bryan Taylor had fun playing the trashy drums, and that should at least count for something, right?

Next week’s episode, the last before a mid-season break, has some of the best music I’ve written yet for the series.  You guys are going to love it!