A perfect way to celebrate Valentine’s Day, the score to this week’s episode, The Lich Part 1, is the darkest and most horrific I’ve written yet for the series.  Surprisingly, the brooding clusters and searing atmospheres were achieved with the smallest orchestra I’ve ever used on “The Cape:”

Instead of our typical 60-piece ensemble, The Lich Part 1 was recorded with an intimate group of 6 strings and 7 woodwinds, with a separate session covering percussion and solo French horn.

Taking my inspiration from the film scores of Bernard Herrmann, I frequently used the low woodwinds as the primary melody, and used the upper winds and strings to create harmonic backdrops.  My orchestras have frequently included low woodwind sections, but “The Cape” has allowed me to expand my knowledge of the instruments’ capabilities.  In the pilot score, we’ve already heard ominous contrabassoon solos representing the Chess Theme.  In The Lich Part 1, I explored these sounds even further.

The four instruments you’ll hear showcased tonight are the two lowest instruments in both the single and double reed family: the bass clarinet, bassoon, contrabass clarinet and contrabassoon.  I had them play a single line in octaves, or dissonant clustered chords, with consistently powerful results.

As with every episode of this series, the most important theme had to be written for the new villain.  In this case, it was The Lich Theme:

The melody is inspired by contrapuntal baroque music, but the distantly related minor chord harmonies are much more contemporary.  To portray this theme, I already had the low woodwinds in my arsenal, but I needed something more exotic as well, something non-orchestral.  I was inspired by the creepy, gothic tone of this episode to use a harpsichord as the primary instrument representing the Lich.  You will hear spindly little harpsichord theme statements and accompaniment figures prancing in the background throughout the entire score, lending the music a baroque tone.

The harpsichord alone wasn’t weird enough for the Lich, however.  So I doubled the harpsichord parts with two passes of clavinet.  A clavinet is a keyboard instrument popular in the late 60s and 70s, similar in tone to a harpischord, but with a wider dynamic range and different tonal possibilities thanks to pickups similar to an electric guitar.  I wanted each overdub pass to be slightly different, so I used contrasting pickups in the clavinet, which itself was slightly out of tune compared to the harpsichord.  The combination of the harpsichord with two passes of clavinet resulted in a uniquely spooky texture.  (To hear me playing a lot more clavinet, check out the “EUReKA” soundtrack.)

SPOILERS AHEAD: The Lich Theme first appears right at the episode’s beginning.  A woman closes up shop at a truck rental place when she’s approached by a tall man in a black hat. Most of the episode suggests this man, Holloway, is the Lich.  The music helps this misdirect by constantly playing the Lich Theme while he’s onscreen.

As he appears, the four low woodwinds offer a slow version of his theme, with each phrase repeated by an echo in the harpsichord and clavinets:

Holloway blows a white dust in her face that knocks her to the ground.  At the moment he strikes, the orchestra bursts into an aggressive crescendo, with clusters in the low woodwinds and an ascending tremolo string figure.  Above it all, the clavinets and harpsichord offer the Lich Theme in its full baroque style:

The woman, Janet, is presumed dead and buried but, later in the episode, it appears she has crawled out of her own grave.  Rollo knew her and enlists Max and Vince to help track her down.  Eventually they find her on a dilapidated old school bus.  The visuals here were delightfully spooky, so I underscored her reveal with an exotic combination of glissing violins, snap pizzicato low strings and growling low woodwinds:

She lashes out at them and must be restrained by Vince.  I matched her hysterical ranting with deep, growling clusters from the four low woodwind instruments, separated by subtle tremolo phrases from the bass and celli:

The low woodwind instruments in this passage sound so menacing, they perfectly represent a zombie crawling up out of the grave.  (I may have to keep this idea in my back-pocket for “The Walking Dead” Season 2!)

At the end of the scene, Janet mentions “the Lich.”  At this moment, the low woodwinds state the first bar of his theme, and are echoed again by the harpsichord and clavinets.  I made sure the arrangement was similar to what we heard in the opening scene so viewers begin to connect “the Lich” with Holloway (part of that misdirect!).

Once they have Janet back at the Carnival of Crime’s hideout, Vince tells Max that “the Lich” is a bit like the Bogey Man.  Rumors circulate he may have a devoted cult following that worships him.  Vince’s creepy story is underscored with a full statement of The Lich Theme in the harpsichord and clavinets:

Janet is still lost in a zombie-like state, so Ruvi steps in to hypnotize her and retrieve vital information about what happened to her.  She recalls her experiences and we witness her terrifying visions.  As hooded figures drag her through an alley, the low woodwinds swell with dissonant clusters while the strings create a bed of atonal pizzicato phrases:

The Lich appears before her, and the harpsichord and clavinets enter with his baroque melody.  The orchestral texture becomes fuller and more horrifying as her vision continues, eventually leading to her erupting into screams.

She calms down, and Ruvi begs her to offer some clue to her whereabouts.  As she goes back into her memory one final time, the contrabass clarinet plays a solo version of the Lich Theme:

This is the only place in the score I featured the contrabass clarinet entirely on its own, so you can really hear how unusual it is.

The scenes with Janet recovering at the hideout were among my favorite to score.  One of the most effective was at the end of the third act, when Rollo tries to comfort her.  Despite his kind words, she offers the chilling prophesy “the dead will rise, whether we want them to or not.”  I began their conversation with a single line played by the celli and solo bassoon, set beneath a droning chord from the upper strings:

There’s a longing in this music I love.  You can really hear the music is trying to be uplifting, trying to be encouraging.  But, there’s an overwhelming melancholy here that can not be overcome.  The act ends with her ominous prediction combined with a chilling statement of The Lich Theme from the four low woodwinds.

Meanwhile, The Cape and Marty team up to catch Holloway before he sabotages a Founders’ Day Parade float with lethal gas.  Come to think of it… I scored an episode of EUReKA about “Founders’ Day” last summer!  Crossover, anyone? 😉

Vince charges in and battles Holloway, as the orchestra chugs away in an aggressive 6/8 pattern: 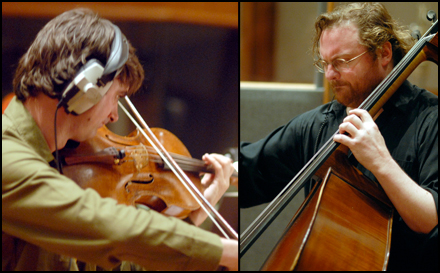 The other subplot of the episode had almost no music whatsoever.  Orwell has gone to an insane asylum to track down Conrad Chandler, the rightful heir to the waterfront property Peter Fleming wants to buy in order to control all shipping to and from the city. If she can prove Conrad’s legitimacy, Fleming’s plot is foiled.

She meets Conrad and he appears to be an innocent victim of a missing family and neglectful society.  But, there’s definitely something odd about him.  The reason I used so little music in their dialog scenes is that I did not want to point out what becomes more and more obvious as the episode goes on: Conrad is up to no good.  Instead, I put all my energy to connecting The Lich Theme to Holloway.

Vince finally defeats Holloway and asks him about his vile plan.  (Notice there’s no more Lich Theme playing in the score here anymore).  At this moment, it becomes clear that Holloway is not the criminal mastermind Lich.  Indeed, he’s just another zombified follower.  That’s when Vince realizes he made a terrible miscalculation, and the chugging 6/8 pattern picks up again in the low strings and winds:

The Lich is finally revealed, but it is Chandler, not Holloway.  The Lich corners Orwell with the help of his co-conspirator and nurse, Netta, and blows the neurotoxin dust in her face.  During the energetic cue, the harpsichord and clavinets add creepy Lich Theme ornaments to the driving orchestral ostinato.

The Lich Part 1 was our smallest orchestra, but gave me the opportunity to explore some of our most exotic sounds yet.  If you liked this music, you’re going to absolutely love next week’s score, which was recorded with our largest orchestra by far.  These dangerous little harpsichord Lich Theme statements will evolve into full-on gothic blasting brass lines, in some of the most truly symphonic music I’ve written in my career thus far.

Check back in a week for a new video blog on that exciting score!