SPOILERS AHEAD: This week’s episode of “The Cape” introduces the previous owner of the cape, Gregor Molotov.  He did not use the cape for good, however.  He is a criminal and murderer, and has spent the past twenty years in Russian prisons.  From the beginning, I knew he required a villainous musical theme.

The Carnival of Crime and Max Malini Themes both drew from Eastern European influences, so it was fitting the origins of the cape hark back to that region.  I knew I wanted the Gregor Theme to feel similar, but in a more geographically specific way.  I composed a melody inspired by Russian folk music, and added male choir, accordion and a balalaika ensemble:

The melody and instrumentation are distinctly Russian, and not overtly menacing.  I wanted the pure evil in Gregor to manifest itself from the actor’s performance and to allow the score, in the beginning, to simply comment on his mysterious background.

The first time we hear the Gregor Theme is in the opening scene, when he dramatically escapes from a maximum security Russian prison.  The low strings, woodwinds and piano offer a militaristic march, set against snare drums.  Then, the low brass and male chorus give us the first phrase of the melody:

The second phrase of the Gregor Theme is then stated by the trumpets and balalaikas.

The majority of the balalaikas featured in this week’s score were performed by Steve Bartek. 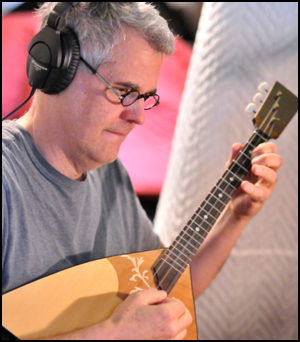 Steve used to play in the iconic rock band Oingo Boingo, and has since worked in the film music industry as a composer and orchestrator.  However, he’s also collaborated with me as a guitarist in “Battlestar Galactica,” “Dark Void,” “Eureka,” “SOCOM 4,” “Trauma” and many other projects.  I was excited for the opportunity to bring him into the score for “The Cape.”

Gregor is not the only plot in this episode, however.  The Cape and his wife Dana both follow leads to the night he was framed in the rail yard.  The Cape remembers the name of an Ark trooper who was there that night, and hunts him down.  Phillips is driving his truck (listening to a cheesy pop-metal song Brendan and I did a few years ago!) and suddenly his door is ripped off. 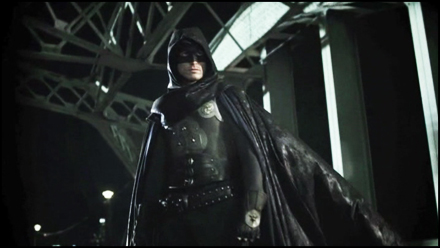 Tremolo strings begin swirling phrases that rise from the lowest register.  The winds ascend with fast ripping phrases as clusters of brass rise from the shadows.  The cue sounds like it’s about to emerge as something from a horror movie, when suddenly Phillips looks ahead to see the Cape standing before him, like a total bad ass.  And with that, the brass quote a heroic Cape Theme fanfare:

Moments like this are why I really love working on this series, because they give me the opportunity to shamelessly blast my superhero theme.

Kozmo also gave me the chance to write some beautiful, truly symphonic passages.  In the scene where Vince follows Gregor into Trolley Park, I created a very cool music texture to accompany him.  Light percussion is doubled with key-clicks from the woodwinds (they’re not making any real pitch, and are essentially percussion instruments now).  Combined with low brass clusters, muted trumpet and horn stabs and ambient dulcimer, the result is a creepy, and distinctly orchestral, sound:

Gregor eludes Vince and ends up in a seedy casino, playing cards with a bunch of thugs, whom he questions about The Cape.

The sound is ominous, and yet very distinct.  These are the kind of oddball orchestral colors I first heard growing up when listening to Bernard Herrmann’s scores for hours on end.  (Check out “Citizen Kane” or “Journey to the Center of The Earth” for amazing low wind and low brass writing.)

Of course, the most fun elements of this episode were the ones where I was able to further explore the Carnival of Crime and the mysterious, old world origins of the cape itself.  The hurdy gurdy, hammered dulcimer, tambourines, small percussion and accordions added their distinct character to the exotic elements in the story.  The 70-piece orchestra gives “The Cape” its epic sound, but the Eastern European ethnic instrumentation give the show its flair.

These sounds are featured prominently when Max first tells Vince the true story of the cape.  It has been passed down from owner to owner through the generations, each one taking up the name Kozmo.  We also learn the cape has traditionally been used for the purposes of evil (perhaps even Jack the Ripper owned it!).

Underscoring this sobering idea, the gypsy ensemble plays an exotic version of the Max Malini Theme:

If you read the blog last week, you know that there are two primary “Carnival” themes.  The Malini Theme is the darker of the two, but the Carnival of Crime Theme is my favorite.  It returns in force this week during a playful scene when Rollo gives Orwell a ride to the Carnival:

Kozmo even gave me the chance to write some Carnival of Crime source music!  Raia practices her routine and we hear the music she actually performs to.  As I hinted at last week, the Carnival source music sounds exactly like the score.  A haunting piece for hurdy gurdy and harp offers a plaintive and dream-like backdrop to her graceful movements:

However, the most exciting Carnival music I wrote this week is, without doubt, the big finale of the episode: Gregor the Great’s Carnival of Fear!  In the episode’s climax, Gregor has taken over the carnival and is prepared to kill every one of them on stage, before a live audience.

The cue begins as source music, playing a gigantic circus fanfare for the beginning of the show.  However, once Gregor is revealed as the ringmaster, the balalaikas take over and the score shifts to the Gregor Theme.  While the theme itself is still played on accordions and balalaikas, the violins and violas add a glissing cluster above it that adds tension and a hint at Gregor’s madness:

In Russian dance music, like a lot of non-western music, the tempo is not necessarily set in stone.  Pieces can accelerate or slow down freely and the ensemble and dancers all stay together.  I wanted to bring this idea to the score, so Gregor’s theme here begins very slowly.  Then, it gradually accelerates as it goes through the theme twice, picking up over 120 bpm in the process.  The orchestration expands and the groove gets more exciting as well.  The result is a very effective increase in tension.  I can’t listen to this music without the muscles in my shoulders tightening a little!

Max and the carnies are in big trouble, and you can tell because the score features blistering accordion lines that pushed the limits of how fast I can play the instrument!  Thankfully Vince swings in (literally) to save the day, accompanied by stacking statements of his theme from the various instruments in the orchestra.

While Vince tries to help Max, Gregor steals the cape off his back.  This is the moment we’ve been dreading, when Gregor is reunited with his deadly weapon.  I underscored this moment with a bad ass statement of the Gregor Theme in the french horns and balalaikas:

The carnival descends into chaos and the orchestra finally bursts into a full action cue.  Statements of the Gregor Theme, Max Malini Theme and Cape Theme intertwine throughout the orchestra as the characters face one another.

Finally, Gregor is defeated and The Cape must decide whether or not to kill him.  His conversation with Max is underscored with an elegant, pastoral passage from the orchestra, providing dramatic relief from the chaotic sequence we just finished.  Choosing to separate himself from Gregor’s fate, Vince spares him, despite knowing that Gregor will likely escape prison again and return.

He and Orwell leave in a dramatic, slow-motion shot that I played as epic as possible, with a sweeping fanfare of The Cape Theme:

The episode ends with an unexpected fantasy / dream sequence involving Fleming.  He holds the music box on his desk, which is suggested to have belonged to his daughter.  He opens it and the chimes begin a gentle waltz.  We fade to a vision of Orwell now performing Raia’s aerial routine, as the orchestra swells with a warm chord and a solo piccolo rises above the chimes:

The waltz pattern in the bells is actually the same ostinato the harp played in Raia’s source piece earlier in the episode, echoed because the visual imagery of Orwell so mirrors Raia.  Is this a dream, a memory, a vision?  The episode isn’t clear, and so the music refrains from any definitive statement about what it means.  Fleming closes the box as the violins, flutes and clarinet sustain a single note.

In many ways, I feel that Kozmo is one of my better scores.  My wind and brass writing are becoming more adventurous, and the addition of the Russian folk music elements were absolutely a joy to write.  Next week, Scales returns in force, so explore a score that utilizes his theme frequently.  Thanks for reading, see you next week!