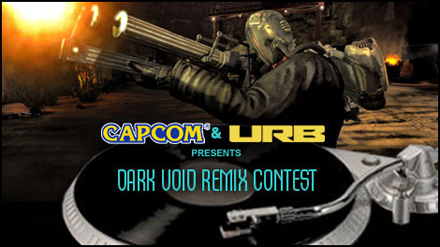 This has got to be one of the coolest contests out there for soundtrack fans!  Capcom & URB are sponsoring a Dark Void Remix Contest.  You have the chance to remix the “Theme from Dark Void” and enter to win a bunch of cool prizes.  The winning entry may even be used in game promos or in a digital soundtrack. Best of all, the individual track assets are made available to you, so you can peel back the layers of my orchestration and mess around with the various elements.

The details and official rules are available here at the official site. (You must create a Capcom Unity account to log in.)

And, for you loyal blog readers, I’ll even help you out.  🙂  Upload your draft somewhere and post a link in the comments field below and I’ll listen to it and make some suggestions for you.  Now remember, I’m only one of the deciding judges, so even if I like what you do that doesn’t mean you win.  But, I look forward to listening to as many entries as I possibly can. Be warned, this contest ends December 15th, so you have to get moving!

Here’s what the press release has to say:

“It’s no small feat to step into Bear McCreary’s world and remix one of his songs. We have the full track, THEME FROM DARK VOID, and other song elements geared up for download and it is up to you to transform it. It’s entirely up to you to determine which direction the musical journey should go. Take a stab at mixing Bear’s orchestral sounds with some drum & bass and rap! Or how about hard rock with elements of classical music? Just do us a favor: make it EPIC! You can download all the song assets HERE.

But before we leave you to tinker, you should read the OFFICIAL LEGAL RULES. Read it? Good. The main points to remember are:

Now here’s the real exciting part: the prizes! All valid submissions will receive 1,500 Community Points toward our COMMUNITY MONTHLY PRIZES. But one (1) Grand Prize winner, who submits the best original remix of Theme from Dark Void as determined by Capcom and the Dark Void Community staff, will receive the following gear:

Amazing, right?! In addition to these prizes, the winning remix may have the opportunity to be featured in a number of promotions. These may include having your winning remix on the digital-only release of the Dark Void soundtrack, used in sync in official Dark Void game trailers, pressed to limited-edition Dark Void vinyl, or featured in a future edition of URB Magazine’s digital issue. Just remember, all promotional considerations are at the discretion of the Sponsor and are not guaranteed in the Grand Prize. You can read all about the Grand Prize in the OFFICIAL LEGAL RULES.

Sound good? Great! We can’t wait to hear the epic interpretations! One final note: the tempo of this song is 143 BPM … thought you might like to know so you can match up other beats.

You have until December 15, 2009 to submit your original remix entry.”

Sound like a blast or what?  I’m tempted to do one myself just for fun, but I don’t think I’ll have time.

And this contest is a great way to step into the musical world of Dark Void.  The full soundtrack album comes out in January on CD and iTunes and it just may end up being my best sounding record, surpassing even BSG Season 4 in scope.  We just finished mastering the album at the world famous Bernie Grundman Mastering facility in Los Angeles and it was bursting off the speakers.  We crammed so much music on this CD that no one thought it would all fit.  (After some clever trimming, it did… with 2 seconds to spare!)  If you are a fan of any of my other work, the Dark Void soundtrack is not to be missed.