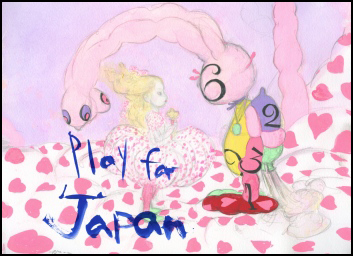 My original composition, “Maverick Regeneration,” is available today on iTunes as part of the “Play For Japan” benefit album for Japan Disaster Relief.

As I watched the images pouring in from Japan last March, the sheer destruction was nearly impossible to comprehend.  Like so many others, I wanted desperately to offer some sort of help to the Japanese people.  Composer Akira Yamaoka clearly felt the same when he produced the benefit album “Play for Japan.”

On the official Play For Japan website, Yamaoka states “In the videogame industry, composers like myself are responsible for engaging the player through music. Music, too, creates bonds, inspiring listeners to share their passion with others. In this spirit, many gifted composers, musicians and artists — from East and West — have come together to record a benefit album.”

When Yamaoka asked me to be a part of “Play for Japan,” I was grateful for the opportunity to donate my musical talents to such a worthy cause.  And I am honored to contribute alongside legendary composers, including Nobuo Uematsu, Yasunori Mitsuda and Koji Kondo.

Videogames, and their music, represent a distinctly Japanese art form that has proliferated around the world.  With this in mind, I wrote my contribution: “Maverick Regeneration.”

The song follows the evolution of videogame music, beginning in an 8-bit style.  The sounds were generated from authentic Nintendo on-board chip synthesis in a process I’ve detailed in earlier blog entries.  These old-school NES chipsounds offer our first glimpse of the track’s main theme:

As the track builds, the instrumentation expands.  I introduced more contemporary synthesizers, electric guitars and eventually orchestra.  After a more dissonant developmental section, the track explodes into a driving heavy metal version of the main ostinato:

The brutal electric guitars were performed by Brendon Small, creator of the acclaimed series “Home Movies” and “Metalocalypse.”  In addition to writing, producing and providing voices for these series, Brendon also composes and performs all the songs and score, and tours with his groundbreaking metal band Dethklok. 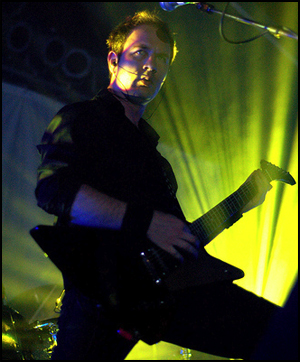 “I’m honored to have been a part of ‘Maverick Regeneration,’” Small said.  “It was a blast to be able to play on the track, and I really dig the tune!  It really is musical and cool.”

“Maverick Regeneration” depicts the growth of videogame music from humble chip synthesis to fully orchestrated recordings.  My intent was for this musical regeneration to represent the inspiring will of the Japanese people, who have rebuilt their country in the past and will do so again, with heroism and grace.

Please show your support for this worthy cause by picking up “Play For Japan” on iTunes and cranking it up nice and loud.