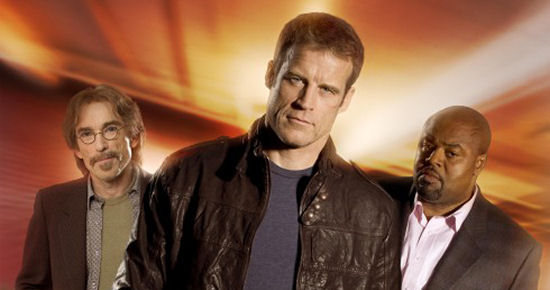 The cat’s out of the bag:  I am scoring FOX’s comic book action series HUMAN TARGET.  I’ve already completed music for the pilot, with a full orchestra recorded at the Warner Bros. Scoring Stage.  The score is epic, bombastic and, above all, tons of fun (I’ll put up audio clips in the coming weeks).  I think that any soundtrack, BSG or general Bear fans will fall in love with it!  🙂

I will be at the convention this afternoon, signing BSG Season 4 CDs, at the Screen Archives Booth.  Its #429, at the North end of the floor.  About the size of an 8th of a booth, its easy to miss.  But, I’m guessing the crowd won’t be.

Last night’s concert experience was nearly a religious one for me.  The energy coming from the crowd was incredible.  David Eick, Edward James Olmos, Michael Hogan, Grace Park, James Callis, Richard Hatch, Nicki Clyne, Michael Trucco, Michelle Forbes and director Michael Nankin all gathered on stage to honor late producer Harvey Frand who passed away Thursday.  We dedicated the concert to his memory and brought the frakkin’ house down.

As promised, I will write up something in more detail next week.  See you at Comic Con and at the FINAL CONCERT, tonight at the House of Blues.