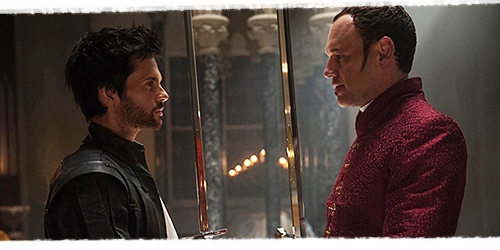 SPOILERS AHEAD: Narratively speaking, “The Blood of Brothers” is the true first season finale. The story of the Pazzi conspiracy is concluded, and our main characters say goodbye before the start of a long journey that will bring new story. Musically, the score reflects these ideas. Themes pertaining to the Pazzi and Medici families are featured prominently, providing triumph for the Medici and humiliation for the Pazzi, while new themes are introduced for new characters.

“The Blood of Brothers” focuses on the story of the Medici brothers more prominently than any other episode. In the opening scene, Lorenzo must accept that his brother Giuliano was slain in battle. This touching scene is made all the more kinetic by the fact that Lorenzo holds a knife over Da Vinci’s throat and is prepared to kill him after having recovered from his blood loss. As Vanessa informs him that Giuliano is no more, the orchestral strings quote a familiar chorale, the Giuliano Death Theme:

As the name suggests, I introduced this theme when Lucrezia stabbed Giuliano, presumably to death, at the river in the final scene of Episode 107. It returned during the first season finale, for the moment when Giuliano finally died in Vanessa’s arms. Vanessa now telling this vital information to Lorenzo was the perfect moment to reprise this chorale, to bring us back to the emotional turbulence we felt in those scenes. Like Lorenzo, only now do we finally have the moment to step back and process Giuliano’s loss, to feel his grief as he struggles to make sense of the devastating news. 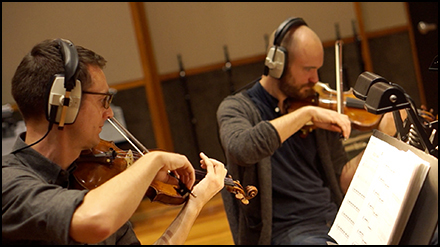 The orchestral strings are playing con sord, with mutes on their strings. These mutes dampen the sound, making it darker and more subdued. This helped the string orchestra emulate the angelic female choir that sang the theme originally, and also helped the score feel emotional, yet slightly dark and funereal. Elliot Cowan, who plays Lorenzo, brings a fantastic vulnerability to his character in this episode, and I always get choked up watching this scene. I hope that the return of the Giuliano Death Theme helps drive these emotions home for the audience.

The Giuliano Death Theme occurs later, when Lorenzo admits he never wanted to be a leader, succumbing to depression. This time, the theme is played simply by the Calder Quartet. The sound is even smaller, more intimate and more vulnerable. At last, when Vanessa tells him that his family actually has a male heir within her, Lorenzo musters his strength, and so the score builds into an energetic version of the Medici Theme:

The Medici Theme is featured prominently throughout the episode, most notably in the extended sequence that begins with his speech to the mob in the courtyard, playing through the capture of the Pazzi conspirators and ending ultimately with Lorenzo’s return to Clarice’s side at the palazzo. The theme goes through a massive transformation, beginning as whipsers in high violin lines as he speaks to the crowd, and finally building into a rousing, regal march.

The result is one of the most exciting cues I’ve ever written for the show. My personal favorite moment comes when the contemptible Jacopo Pazzi hides from the mob in a confessional. The cue is built from an elegant ostinato played by the Calder Quartet: 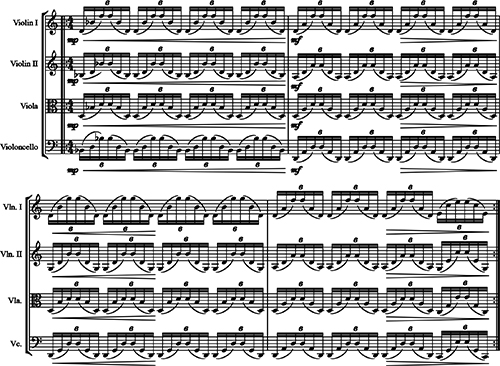 The music is driving and energetic, but it is not suspenseful. Though it seems counterintuitive, the score here is hopeful, providing the scene a sense of inevitability. The music tells us Jacopo, and the other Pazzi conspirators, are doomed. They have no chance for escape. We revel in watching him finally get what he deserves. I felt the suspense should all come during Lorenzo’s speech. Once he wins the crowd over, the rest of this magnificent sequence is just the joy of watching these loathsome characters get rounded up and executed.

This same hopeful chord progression builds intensity as Lorenzo rides his horse triumphantly back to his family. As the Pazzi conspirators flee, the driving score is laced with slithering statements of the Pazzi Theme:

This theme has had its day and will die with the conspirators themselves.  The last you will hear of it is in Francesco Pazzi’s walk to the gallows. As his neck breaks, his theme dies with him. I won’t miss this character, but I will miss Elliot Levey’s screen presence. He was a worthy adversary for Lorenzo, but his absence will be filled shortly.

As we kill off major antagonists from the first season, we also meet new ones: King Ferrante of Naples, and his son Alfonso, the Duke of Calabria. Their entrance is greeted with a stately viola da gamba solo playing the Naples Theme:

Hinted at it in the season premiere, this is the first full statement of the Naples Theme, which is based on a traditional Renaissance song called “L’homme armé” or “The Armed Man.” This piece was a popular setting for Masses during the time, and several of the ones that have survived were uniquely Neapolitan in source, making it an ideal choice for this theme. The earliest known setting of “L’homme armé” comes from a composer of the era, Robert Morton. Over time, this melody came to signify Christ, and took on militant overtones, signifying the Christian struggle over the “dreaded Turk.” In his first scene in the series, King Ferrante makes clear that he is appointed by God to ward off the Ottoman Empire. I selected “L’homme armé” as the Naples Theme to help underscore Ferrante’s grandiose image of himself. 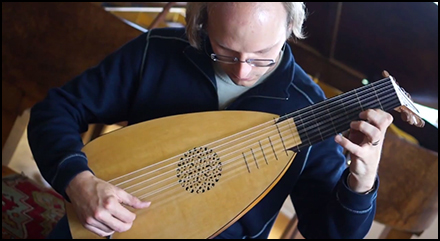 As Sixtus and Ferrante negotiate and conspire, a viola da gamba offers ominous statements of the Naples Theme, while hammered dulcimer and lutes reply with the ominous plucked notes of the Rome Theme. As is very typical with dialog scenes in this show, the interplay of the musical themes mirrors the dynamic flow of conflict within the dialog. The Naples Theme will play an increasingly prominent role as the season unfolds.

Meanwhile, at sea, Count Riario shares an intimate, and intriguing, scene with Zita. For this scene, I brought back the Zita Theme that was first introduced in the season premiere:

The Horned God Theme makes a subtle reappearance in “The Blood of Brothers” as well. As Da Vinci speaks with Verrocchio about the myth of Daedelus, the score sneaks in with ominous, ambient tones and the signature tremolo bouzouki texture that has come to signify the Enemies of Man.

As Verrocchio warns him to stop pursuing his dangerous path, a solo duduk quotes the full melody of the Horned God Theme:

As I mentioned in my previous blog entry, the Horned God Theme is an upside-down version of the Sons of Mithras Theme (which makes a cameo in this episode when Lorenzo discovers the secret of his father’s blade). The horizontal symmetry conflicting with the vertical inversion of these two themes underscores the notion that these factions are related, but equally opposed, entities. 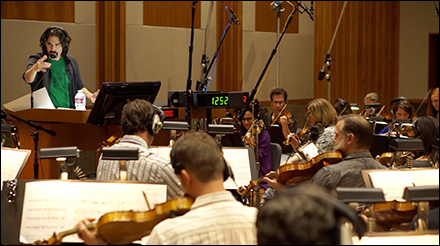 “The Blood of Brothers” essentially wraps up the Giuliano story arc set in motion in the first season, and as such, the final scenes feature all the relevant themes in subtle quotations.

First, Vanessa meets with Clarice who proclaims that, as the mother of a Medici child, she must remain at the palace, essentially as a prisoner. We feel Vanessa’s pain and humiliation as Clarice taunts her sexual history with Giuliano. This scene is underscored with a darker variation of the Giuliano / Vanessa Love Theme:

This theme was first introduced in Episode 106, and was developed in 107 and 108.  Here, the arrangement is slower and more ominous. It now represents the ghost of their relationship, because that relationship has not only ended, but it has cost Vanessa her freedom.

As the episode cuts to Lorenzo practicing his eulogy for his fallen brother, the strings transition smoothly from the Giuliano / Vanessa Love Theme to the Giuliano Death Theme. I finally had an opportunity to put these two Giuliano themes together in a single cue, one that represents both sides of Giuliano’s character: the hope of a new bloodline, and the tragedy of the slain brother. The Giuliano Death Theme here completes a trinity of scenes in the Lorenzo character arc for this episode. We heard it first when Lorenzo learns of Giuliano’s Death, again when he learns of Giuliano’s unborn Child, and finally as we see Lorenzo beside his brother’s body.

The Medici story begins a new chapter in the final scene, with the burial of one brother, and the formation of a new brotherly bond. Lorenzo gives Da Vinci the companion half of his father’s mysterious sword, and accepts him as his blood brother. At first, the score features an elegiac statement of the Medici Theme in the strings, but as he bestows the blade, a driving 12/8 ostinato in the low strings and viola da gamba kicks in.

The track increases energy, while the strings build a hopeful variation of the Medici Theme. The rousing cue makes a promise of swashbuckling adventure to come that the series will most certainly fulfill in the episodes to come.