The Battlestar Galactica score is comprised of an unusual assortment of instruments from around the world. While many episodes feature colors and themes specific to that particular storyline, there are a handful of instruments that have become integral to the musical tapestry of the entire show. Of these, the most melodic and commonly used is the duduk.

END_OF_DOCUMENT_TOKEN_TO_BE_REPLACED

Themes of Battlestar Galactica, Pt I

I get asked pretty frequently about the use (or lack thereof) of “themes” in Battlestar Galactica. The word “theme” was something that the producers wanted to avoid as they re-launched Galactica, I think because they felt that strong, orchestral fanfare had been done to death in science fiction. Beyond that conceptual premise, the reality is that orchestral bombast in the score would ruin the carefully constructed sense of realism in the writing and production.

END_OF_DOCUMENT_TOKEN_TO_BE_REPLACED

Hey BG fans, I just thought I’d let you all know that the beginning of Season 3 truly kicks ass. I’ve started writing music for it and I think it’s safe to say you’ll be blown away. I won’t spoil anything (you have each other for that!) but I will say that the season premiere will air as a two hour movie… more intense than most films you pay to see in the darkened theater.

END_OF_DOCUMENT_TOKEN_TO_BE_REPLACED 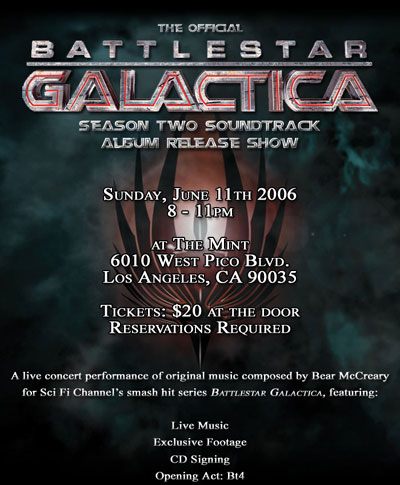