Caprica: Ghosts in the Machine 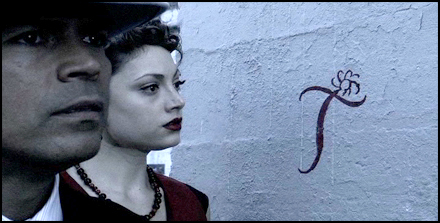 SPOILERS IN THE MACHINE: Tonight’s episode of “Caprica” takes us to the darkest and most surreal corners of New Cap City as well as Daniel’s personality.  As usual with this series, scoring the dramatic moments is only half the job.  I spent an extraordinary amount of time on Ghosts in the Machine creating various source pieces for Joseph’s adventures in the drag club in New Cap City. 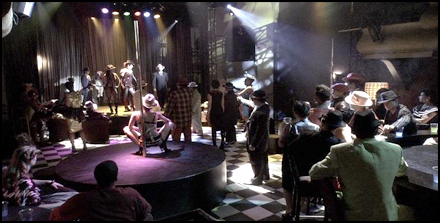 I was originally brought in on this episode prior to production.  The script introduced Joseph to a mysterious drag queen named Cerberus who would help him on his quest to find Tamara.  There were multiple dance numbers in an extended set of sequences in this environment.  I worked with an on-set choreographer and with the actor playing Cerberus and crafted several original compositions for them.

The only creative direction I got was that the music should evoke a drag club within the BSG universe.  That’s pretty vague, but enough for me to come up with some ideas.  I wrote a few cues that combined traditional cabaret music with Japanese percussion and woodwinds that brought the BSG / Caprica vibe. 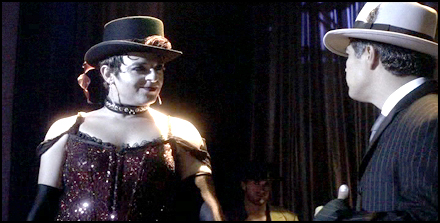 At the last minute, a day before shooting was to begin, the producers asked me for an additional piece: a percussion extravaganza they could play back on set just for inspiration.  So, I threw together a techno-inspired piece in about an hour.

I was never really happy with the longer pieces I’d composed for the choreography.  I didn’t have the time to get the balance between cabaret and taiko drums right, and figured I’d go back to these pieces when the scoring process began and change them drastically.  And it didn’t make me feel better when I realized the techno percussion piece I threw together in an hour was more fun than the choreographed pieces I’d spent days on.  (Anyone working in a creative endeavor knows all too well that this kind of thing can happen.  Sometimes the best ideas come quickly.) 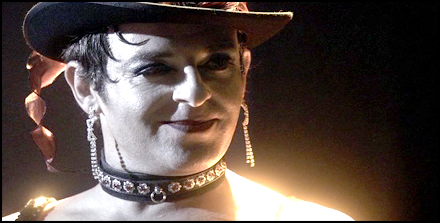 Fortunately, as fate would have it, all the choreographed sequences in the episode hit the cutting room floor anyway.  And for good reason.  While visually exciting, these scenes didn’t advance the narrative in an episode already brimming with important plot developments.  However, the goofy little techno percussion piece I wrote survived, functioning as source music for Cerberus’ club.  In fact, this music would be essential in establishing the seedy sub-culture Joseph was entering.

So, months after originally sketching it in an hour, I had an opportunity to take this comedically ridiculous techno piece and improve it, tweak it and perfect it to my heart’s content.  But, I stopped myself.  After all, I learned the last time I worked on it that when the inspiration is there, its best not to gild the lily.  So, I set a timer for 45 minutes and made as many tweaks to the arrangement as I could until the timer went off.  After that, I was done.  So, the sum total of time spent writing this dumb-ass techno song is less than 2 hours! 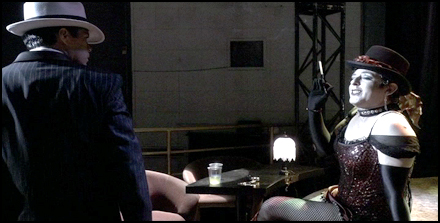 And to my surprise, this techno track, called “Burlesque,” became one of the most fun tracks I’ve produced yet for this series.  It sounds exactly like what I hoped for: a dark, loud drag club within the BSG universe, combining elements of electronic music and the ethnic flavors of BSG and Caprica.  Honestly, its the kind of song that would go over very well at any future live concerts we do. (I guess I’ll have to start calling them “The Music of Battlestar Galactica and Caprica” concerts!)

The entire song is based on a simple bass line, with only two chords and a relentless “4 on the floor” kick drum pattern common in house music: 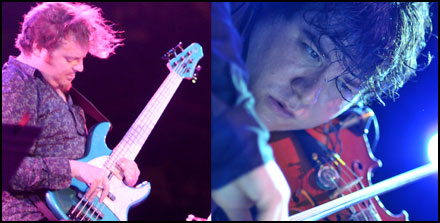 Compositionally, this is the stupidest thing I’ve ever written.  But, the smartest thing I did was allow the musicians in the BSG band to go wild and have fun with it.  Take, for example, this amazing electric bass solo by Mike Valerio, followed by a searing electric violin by Paul Cartwright:

The only section in the entire song to break the musical format is a simple bridge, that changes up the rhythmic phrasing, but still doesn’t introduce a single new chord:

Later in the track, Valerio has another bass solo while Brendan McCreary lays down a mean, Sepultura-inspired, guitar solo: 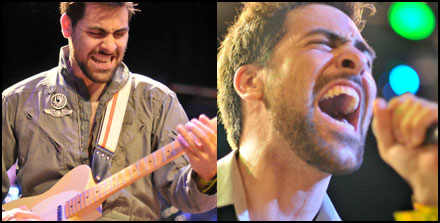 Speaking of Brendan McCreary, I realized I made a serious omission in my blog entry last week when I didn’t mention the song in the Dive Bar.  In The Imperfections of Memory, Clarica and Amanda spend some time in Clarice’s favorite hang out.  I asked Brendan to write something special for Clarice and he, once again, completely blew me away.  Like his song, “I am a Man” from Gravedancing, he took what could have been a simple groove and crafted a complete, and utterly stunning, full song.

The song is called “All of This Has Happened,” and it perfectly captures Clarice’s mysterious, sub-surface threatening nature.  Unlike his Doo-Wop song, this piece is much darker and more fitting of the BSG universe.  As a vocalist and songwriter Brendan is proving himself quite the chameleon: creating gangster rap, doo-wop and contemporary alt rock tracks at a moment’s notice. 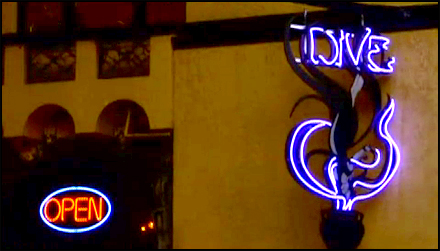 The song begins by building up a hypnotic guitar line.  I love the trippy vocal quality he brings to this that reminds me of the powerful vocals he laid down on BSG‘s “All Along the Watchtower:”

As the groove kicks in, he gets to the kick ass chorus, which ranks among my favorite lyrics Brendan has ever written: 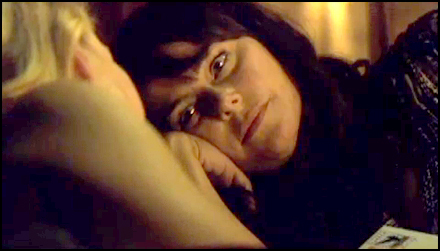 With this, “I am a Man,” “Caprica Abides,” “Was Love” and the V-Club tracks, any future “Caprica: Season 1” Soundtrack Album will include some amazing songs!

Speaking of which, you guys are in for a big treat next week.  The mid-season finale features one of the most powerful compositions I’ve ever written in my life.  I’m eager to hear what you guys think of it.