Before I begin, I should warn you all my entries about Season 4 episodes are going to get very detailed.  In the past, I’ve gone into meticulous detail and nobody seems to mind. So in honor of this being the last season, I will be as thorough as I can.  I’ll still keep it as entertaining as possible, but some musical jargon is inevitable.  Also, it’s safe to assume that all posts should be considered SPOILERS.  If you haven’t watched the episode yet, catch up before you read on.  And, since this blog is a bit more interactive than my previous one, feel free to leave a comment below and ask about anything I don’t get to.  On to He That Believeth… 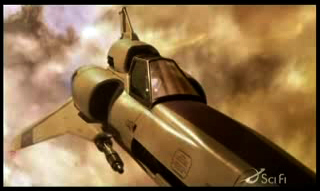 Season 3 concluded before a hypnotic, rock-inspired “All Along the Watchtower” backdrop, but Season 4 begins with a cold snap back to reality.  So the score enters simply, with the strains of a solo erhu, playing Kara’s Destiny Theme as we return to Kara and Lee, flying side by side.  The oddly serene moment is not too last, however, and we’re almost immediately thrown into one of the biggest battle scenes I’ve ever had to score for Battlestar Galactica.

This sequence is immense, spanning the entire first act, and the music had to match.  Japanese-inspired rhythms that first snuck into my work with pieces like “Storming New Caprica,” “Fight Night” and “Mandala in the Clouds” come to the foreground here.  The entire ensemble of ethnic soloists, including er hu, zhong hu, bansuri, yialli tanbur, electric fiddle and duduk are tucked away behind the full arsenal of nagado daikos, shime daikos, tablas, frame drums, whale drums, and hand percussion.

However, what makes this battle cue unique is that it includes strands of a very important theme, that I now call the Final Four theme:

This riff was first developed while I was arranging Bob Dylan’s “All Along the Watchtower” for the third season cliffhanger, although it is in no way derived from Dylan’s music.   It will play an increasingly important role in the score for the fourth season.

The Final Four melody is first heard when Tigh pulls a gun on Adama in the first few minutes, hidden beneath a wall of electric sitar, violin and guitars, echoing “Heeding the Call” and “Watchtower” from season 3. 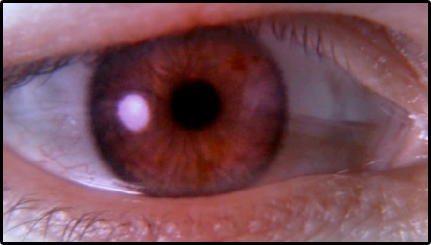 It resurfaces prominently as the enemy raider scans Anders’ eye and then breaks off the attack.  And it is repeated again during the scene when the Four meet in secret.  Viewers with keen ears will pick up distant refrains of this melody all throughout the fourth season, as Tyrol, Tigh, Tory and Anders each come to live with their newly-discovered Cylon natures in unique ways.

The Final Four theme is not the only musical identity to be redefined in Season 4. In this episode, Gaius Baltar begins a spiritual transformation from political despot to religious messiah (at least in his own mind).  The roots of this shift in character go all the way back to Season 1, particularly “Hand of God” (also written by Thompson / Weddle) where 6’s ideas of One True God began to take root in his mind.  Rather than creating a new theme for Gaius’ religious escapades, I decided to shift and adapt his current theme, to mold it the same way the writers are molding his character.  The new-and-improved Gaius Baltar theme is a chant-like drone of C#, G7, Bbm and A9, that is first heard as Gaius is led into the lair of devoted followers, and brought before his own shrine. 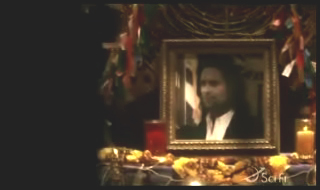 The last two chords in the progression come directly from the original Baltar theme.  In fact, the duduk and yialli tanbur state his original melodic theme over these chords at nearly every repetition.  However, his theme is well-masked in this new musical context.  The first two chords of the progession shift emphasis away from the dark nature of the last two chords.

This revised, spiritual Baltar theme truly sounds like a new piece of music, with the elements of his old theme adding an oddly familiar strain.  The musical character is now so serene, so mysterious and spiritual that the dark and ambigious original Baltar theme hidden inside it is virtually unidentifiable.  But, it is there, representing the darker side of his persona still within him.  (Perhaps, I’m suggesting musically that he’s a new man… or is he?)  After all, we still don’t know if Baltar’s religious epiphanies are for the benefit or detriment of humanity.

The new Gaius theme is by far the most intricately layered I’ve ever written for the series.  The gamelans and harps begin the piece by stating the arpeggiated figure above.  Then, the repetitive chordal drone repeats the chant-like loop, while the instrumental and vocal arrangement builds steadily.  Exotic percussion plays against the steady gamelan figure.  Distant female vocals, (performed by Raya Yarbrough) sing in Anglo-Saxon; the lyrics are a prayer to Gaius and will be heard throughout the episode:

However, the new Gaius theme does not completely replace the old.  The two versions interact in very calculated ways.  In my mind, they represent the battling sides of his persona: the genuine, spirtual being and the manipulative, selfish bastard.  His personalities are not easily separated, and thusly neither are his themes.  They are closely related, indeed, his spiritual theme could not exist without the darker one providing the last two chords. 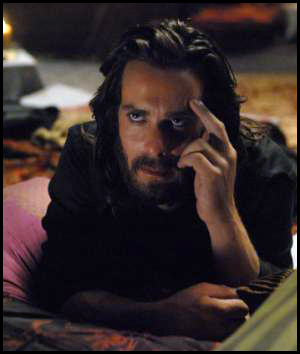 To highlight this connection between Baltar’s polar personalities, his themes do not take sides.  Sometimes the spiritual theme will play sinister moments (for example, when the sick boy is first brought before him) and the darker theme will play religious moments (his epiphany beneath Connor’s razor when he says “Take my life.”).

Several other themes that play important roles throughout the season get their foot in the door in this episode.  Kara’s Destiny theme, represented by the solo erhu, is heard as she is haunted by her past demons and her missing two months.  This theme was first composed for the Season 3 opener “Occupation,” developed in “Maelstrom,” and has come to represent the divine, yet confused spirit within her.  But, statements of her original theme also remain woven into the texture of her scenes.  Like Gaius Baltar, her character has become so complex and layered, that a single musical idea can no longer represent her.  A delicate balance of multiple themes is required.

And one theme even returned from the distant past, the early days of Season 1.  As Adama and Lee discuss Zak, the score quotes the closing moments of “Two Funerals” from Act of Contrition. 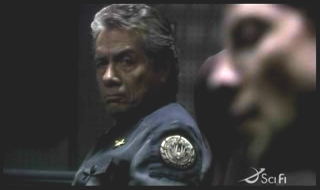 This piece was originally written to underscore Zak’s funeral flashbacks.  Although it has been edited into the show on several occasions, most often because the producers fell in love with a temp score (Socinus’ Death in Valley of Darkness is a prime example), I’ve always considered it to be Zak’s theme.  This brief conversation between father and son provided the perfect opportunity to bring it back and reinforce that idea.

I’ve seen another 12 episodes ahead and can assure you that the show lives up to the promise of He That Believeth… And, in case you somehow hadn’t heard about it, be sure to check out my upcoming Music of Battlestar Galactica concerts in Los Angeles April 13th and April 15th.  The 13th is already sold out and the 15th is almost sold out as well.  So, get your tickets soon!  See you there…