Tonight’s episode, “The Hub,” focuses on the battle to destroy the Cylon Resurrection Hub, but also on Laura Roslin, who… wait a minute… wrong series, same name.  🙂

The episode called “The Hub” from “Marvel’s Agents of S.H.I.E.L.D.” dives into the show’s spy-genre roots — Ward and Fitz go behind enemy lines to destroy a powerful weapon. The intense stealth and combat scenes gave me plenty of opportunities for big action scoring, as you can hear in this week’s video blog: “Agents of BEAR: A Lot of Notes.”

From the episode’s opening notes, over the Marvel logo, you can tell we’re traveling to an ominous, military environment. The low strings and woodwinds punctuate a military-style cadence as we reveal a hooded figure being dragged through the bowels of a prison complex. Though the visuals and music are foreboding, there’s a sense of fun in the music that hints at the adventure to come. 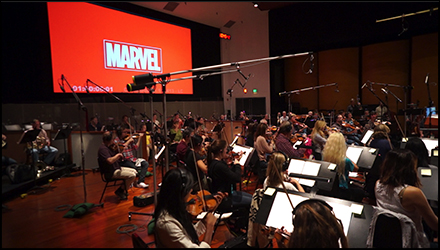 Speaking of sprawling military-industrial complexes, in this episode we are introduced to the titular hub, the central main frame for all S.H.I.E.L.D. activity. My first instinct was to score this scene with the series’ main theme. But, something about that approach didn’t feel right. That theme has come to represent Agent Coulson and his ragtag group of misfits operating on their own. This is the mothership. The producers referred to it as “Big S.H.I.E.L.D.” Rather than unifying The Hub with our characters, I wanted to separate them from it. The Hub needed to feel imposing and new, which also helps root the first scene there in Skye’s perspective. She’s overwhelmed by the scale of the operation.

As our team first walks through The Hub, the horns and trumpets blare an imposing statement of my newest theme, The Hub Theme:

Repeated small intervals followed by jagged, unexpected leaps make The Hub Theme harder to predict than the soaring and broadly heroic Coulson Theme. This theme is unsettled, and indicates there’s more going on at The Hub than people realize. It is the system, and it has an agenda of its own. 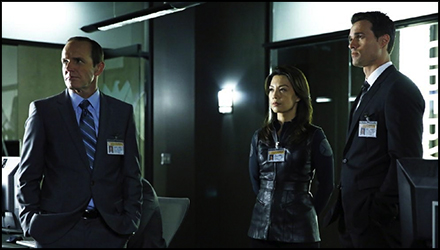 Not trusting the system is a major theme of the episode, first introduced by Skye as she hacks into the database (with the help of Simmons in a particularly comedic sequence). Skye has to make a choice between using the hack to find long-sought-after files about her parents, or to help her friends.

This pivotal scene was a tricky one to score. Skye is facing a huge decision here, but the scene is visually restrained. It’s just her sitting in the dark looking at a computer screen. To make the challenge even more complex, the important story information is not even what’s on her screen… it’s what is not on her screen (she can’t download the images, etc.). So, the scene required heavy lifting from the score to make sure that the audience understands what’s at stake.

To achieve this, I underscored the emotion of her internal conflict instead of the external threat that she might get caught. (This sort of approach always yields better results anyway.) As Steve Bartek’s electric guitar sneaks in beneath pulsing synth basses and swirling strings, the first violins pick up a mysterious statement of the Skye Theme:

As Skye finally makes the decision to help her friends, a driving action riff picks up, punctuated by a soaring horn line. If you listened to this cue on its own, you might mistake it for an epic action cue. But, its just for Skye sitting in front of a computer. Of course, the stakes are high for her. That’s the fun of scoring “Agents of S.H.I.E.L.D.” We’re painting on a big canvas. Even moments that are visually intimate can have major narrative impacts, so I have the chance to kick them into high gear with soaring orchestral lines. 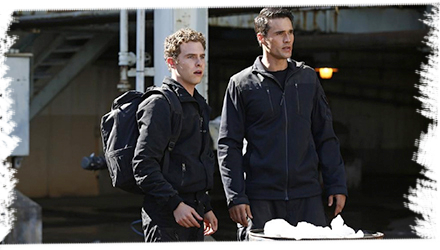 At the climax of this scene, Skye learns that Ward and Fitz have been sent deep into a combat zone with no extraction plan, where they will likely meet their end. The Ward and Fitz scenes are where the majority of the fourth and fifth act take place, both of which are scored with wall-to-wall bombastic action cues. The Eastern European military setting gave me the chance to write some ‘Red October’-inspired brass lines, while the stealth aspects of the scenes let me bust out some of the most aggressive synth programming I’ve done since “Defiance.” 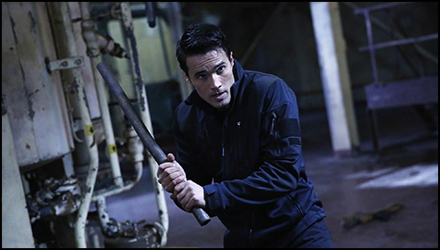 One of my favorite moments is when Fitz puts up the ‘magic window,’ and panics as he unknowingly watches Ward fight off a couple guards. The score here is dramatic, and admittedly a little over-the-top. I think most people in the audience suspect what’s really going on, so it was fun to play the moment from Fitz’s perspective and amp up the stakes in a comedic misdirect. 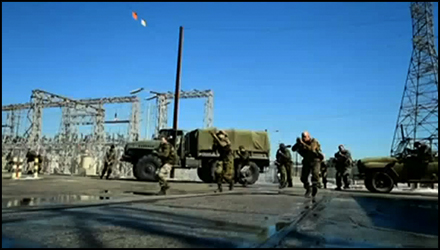 As the sequence builds intensity, aggressive military-inspired low string and low woodwind ostinatos sneak in, reminiscent of the ominous lines that began the episode.  (You can hear great clips from this action cue in tonight’s video blog.) 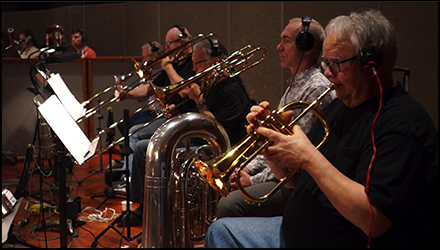 The sequence crescendos to the moment when The Cavalry arrives. Melinda May pilots the jet to blow away the competition so to speak. I underscored this moment with a huge low brass fanfare of the series’ Main Theme:

This seemed especially appropriate because the first time we ever heard this theme in the series was on the reveal of the plane in the pilot. So, its as much a theme for the plane as for anybody else!

“The Hub” ends with a lovely emotional moment between Coulson and Skye, when he tells her what he learned about her parents. Here, I orchestrated a warm variation of the Skye Theme, filled with emotion. The score helps highlight the parental relationship forming between these two. Of course, the sentiment is short-lived. In the next scene, Coulson reveals to May that he actually withheld crucial information from Skye and the orchestration turns darker. 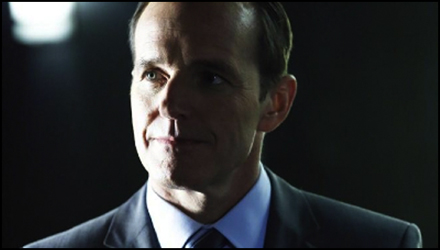 Their conversation doesn’t linger on Skye, however. Coulson asks May for help in figuring out what happened to him after the battle of New York. Suddenly, he is at his most vulnerable. A solo harp offers a gentle statement of the Coulson Theme. We’ve never heard the Coulson Theme like this before. This delicate sound is about as far away from soaring brass as possible, and drives home the idea that Coulson is a new emotional space.

“The Hub” is an important episode that sets up crucial narrative dominoes for the rest of the season. I really enjoyed writing a theme for Big S.H.I.E.L.D. and I imagine you guys will be hearing it again in the future. But, most of all, I really had fun diving into the super-spy genre with reckless abandon. Next week’s episode is another big one, and allowed me to write some truly mythological music. Stay tuned!